If you’re looking to buy a new GPU to pair with an i5-6400, then you’ve come to the right place. In this guide, I’ll run you through all the things you need to consider first, and then offer some recommendation to consider.

To give you the quick answer, for most people, the best option is an Nvidia GTX 1060.

Our top recommendation for a GPU to pair with an i5-6400 is a GTX 1060. The i5-6400 isn’t a particularly powerful CPU and it will hold back higher end GPUs than the GTX 1060. This combination will perform reasonably well in most games at 1080p, however, newer games will struggle to consistently stay above 60 FPS. This is due more to the CPU than the GPU though. You might want to consider a more powerful GPU like the RTX 2060 if you plan on upgrading your CPU in the near future. 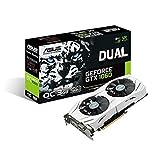 Before we take a look at the best GPUs to pair with an i5-6400, I first want to run you though some things to consider. This is important to help you choose the right graphics card for your situation. There is a lot to consider here, so once I’ve gone through the list, I will show you a cool way to see how well a GPU runs specific games at different resolutions

Although you probably found this information somewhat useful, it doesn’t tell you which specific GPU is best suited for your situation. What I recommend is to head over to YouTube and search for a specific game you like to play followed by your monitor’s resolution, your CPU, and a GPU you are interested in buying. e.g. “battlefield 4 1080p i5 6400 gtx 1060”. For more popular games, there will be quite a few videos. This will give you a good idea of how well a game will run if you were to purchase that GPU. If for example, the average frames per second is around 90 FPS, and you have a 144hz monitor, the GPU would be a reasonable choice.

Now you should have a better idea of what you want from your graphics card, now let’s look at some options to consider that pair well with an i5-6400.