You are here: Home / Buying Guides / The Best PC Cases for Airflow

Airflow is one of the most important factors to consider when choosing a PC case, especially for powerful builds. Without good airflow, your components can overheat and your PC can slow down or stop working altogether.

In this guide, you can find the best mid-tower and full-tower PC cases which are designed for amazing airflow. I also talk about what we mean by airflow, the importance of airflow, and the downsides of airflow PC cases. Finally, I look at the other factors you need to consider when choosing a PC case.

Mid-tower cases are the most popular size of PC case. They’re big enough to build a powerful rig, but they’re not too big that it’s inconvenient.

In the table below you can find our top three picks for budget, mid-range, and high-end mid-tower cases for airflow. We chose these cases based on user reviews, discussion forums, reddit, and the value for money they offer. 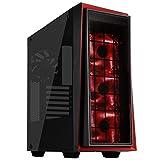 Although the cases above are the best choice for most people, there are a few more mid-tower cases that also have very good airflow. You can find them in the table below.

There’s not much choice when it comes to full-tower cases, especially when you’re specifically looking for good airflow. However, the three cases below are excellent for airflow and users rate them very highly. 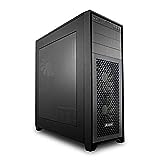 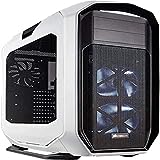 What Exactly is Airflow?

As you probably expect, the term airflow is pretty self explanatory. We’re simply talking about the flow of the air through the case which prevents your components from overheating. If a case has good airflow, it will be effective at removing warm air and making sure the air inside the case is cool.

The video below is a great simulation of how airflow works.

How Important is Airflow in a PC Case?

There’s no doubt that airflow is important for any PC build. If you want your PC to run smoothly and not die on you, you’re going to need to keep your components cool. The question is, how important is airflow.

Well it’s very important to have at least some airflow in your PC case, but this doesn’t mean you need to go over the top with the fans. In this Linus Tech Tips video, they found that once you start using more fans than the stock fans that come with the case, you don’t see much improvement.

So instead of going OTT with the fans, I would prioritise choosing a case with good airflow (like one of the cases at the top of this page). This should give you the best results in terms of keeping your components cool.

What Makes a PC Case Have Good Airflow?

The most obvious factor that influences airflow is the fans. Although I mentioned using more fans than what comes with the case doesn’t make that much of a difference, it does still improve airflow. Other than the number of fans, larger fans and more powerful fans will also improve airflow.

The other thing which makes PC cases good for airflow is a mesh front panel which helps with ventilation.

Are There Downsides to Good Airflow PC Cases?

Yes. When you have a PC case with a mesh front panel and lots of powerful, large fans, it’s going to create a lot more noise than if you didn’t focus on airflow.

Of course, you can never eliminate all of the noise, but using high quality fans can definitely help to keep the noise levels down.

Other Things to Consider When Choosing a PC Case

Along with choosing a PC case that is good specifically for airflow, there are some more general considerations to take into account.

The most important thing to consider when choosing a PC case is the size. There are four main sizes which I have outlined below. Within each of these size categories there are variations in size so do make sure you check the dimensions of specific cases if the exact size is important to you. For example, you can get smaller mid-tower cases and larger mid-tower cases. These four size categories are just a guideline to the size, and refer more to the types of motherboard they are compatible with.

Another thing you need to consider is the cost of the case. You might be thinking that since there aren’t moving parts to a PC case that a more expensive case won’t have much else to offer over a cheaper case.

This is true to a certain extent. Obviously build quality comes into play and you don’t want a case that falls apart after a few weeks. But unless you want the case to have a certain look or you need specific features, you don’t need to spend a huge amount.

When it comes to PC cases for airflow, generally, the more expensive cases are better.

Some people don’t care at all what their PC looks like, but to others it is a big deal. Whether you want to build a futuristic-looking gaming PC that looks like it’s just landed from outer space, or you want to avoid that completely for a more formal setting, you might want to consider the aesthetics of the case.

Finally, you should consider any additional features you might need. This includes things like the front panel and the number/type of ports on it, fans built into the case, and the number of drive bays.

Some PC cases have a tool-less design. These are designed so you won’t need screwdrivers or other tools to put your build together. This isn’t a huge deal, but it can be handy if you will be replacing parts or moving stuff around a lot.

Airflow is a very important factor to consider when choosing a PC case. Without good airflow, the components in your PC can overheat and stop working. This is especially true for powerful rigs like gaming PCs. The first step to getting good airflow is choosing the right case like the ones we have recommended at the top of this page.