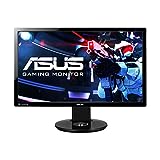 The BenQ XL2411Z and ASUS VG248QE are very similar monitors. They both have a 1080p resolution, 144hz refresh rate, 1ms response time, and even use the same panel. However, there are a few differences which set them apart. Overall, I would choose the BenQ over the ASUS for a few reasons, but there isn’t much in it. However, I would choose the ViewSonic XG2401 over both of these monitors.

The BenQ XL2411Z has been discontinued by the manufacturer and you may find it is unavailable to purchase. You can find the updated XL2411P on Amazon.

One of the main differences between these two monitors is the design. Obviously this is subjective so it’s a good idea to compare them yourself to see which you prefer. However, one thing I will point out is that although the gloss finish on the ASUS VG248QE looks nice when it’s new, it is prone to scratching very easily. Personally, I prefer the overall style of the ASUS as it has a ‘premium’ feel and – to me at least – the BenQ looks a bit cheap.

Both monitors have plenty of settings you can fiddle around with to get the picture looking how you want. There are lots of guides online for setting up the monitors display which are definitely worth checking out. One Feature that stands out with the BenQ is the flicker free technology. As the name suggests, this prevents flickering on the monitor and is particularly good for people who suffer from headaches.

In terms of their specifications, the BenQ XL2411Z and ASUS VG248QE are very similar. They both have a 1080p resolution, 144hz refresh rate, 1ms response time and use the same TN panel. This makes them good for competitive and fast-paced gaming, but the TN panel is known for producing quite a poor picture quality in both monitors. I would advise considering the ViewSonic XG2401 over both of these monitors. It is similar in most aspects to both of these monitors but has a better picture quality.

When purchasing one of these monitors, you do will need to be careful when it comes to the connections. The ASUS VG248QE has HDMI, DisplayPort and Dual-link DVI-D connections. This isn’t a problem. However, the BenQ XL2411Z does not have a DisplayPort connection. The newer BenQ XL2411P does have a DisplayPort connection, but some people who have bought this model from Amazon have received a monitor without DisplayPort. Presumably they are receiving the older XL2411Z model. DisplayPort is becoming the norm with newer graphics cards and some graphics cards are starting to drop DVI support so it is quite important in terms of future proofing.

Both of these monitors are usually around the same price, so if you want to keep to a tight budget, I would simply go with the cheapest. Otherwise I would go with the BenQ due to the flicker free technology. However, for a similar price you can pick up the ViewSonic XG2401 which has a better picture quality and will give you more bang for your buck.